At the Pastoral Pig, Carving Meat is an Art Form 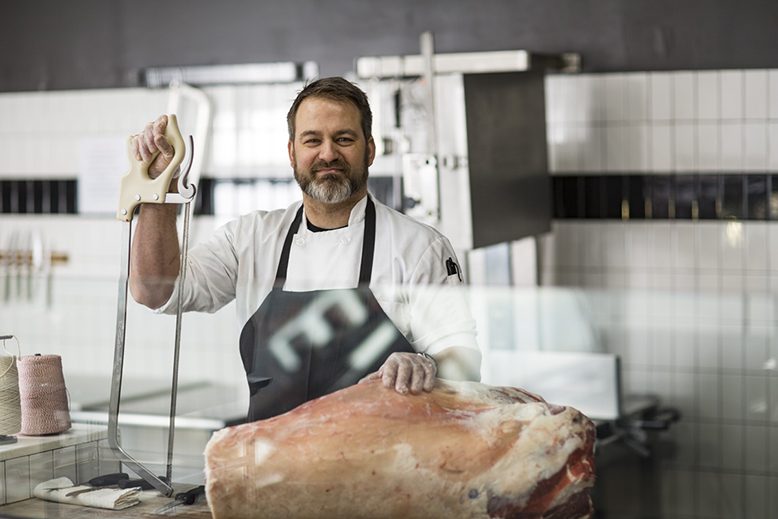 The Flanders shop specializes in whole-animal butchery—and boasts a deep reverence for what farmers and nature provide.

If you get to the Pastoral Pig in Flanders early, you’ll see something rare: butchers breaking down a whole pig or side of beef, not in a back room, but in the open for all to see.

The Pastoral Pig, which carries only grass-fed, organic, pasture-raised beef, pork, lamb and poultry, specializes in whole-animal butchery rather than buying boxed cuts.

“It’s like CSI for us,” says head butcher and co-owner Sebastien Destree. “With the whole animal, we can tell you how the animal was treated, if it was mistreated, and what it ate. You cannot do that when you just get parts in a box.”

Destree, 44, grew up in Lyon, France, where the butcher shop was the social center of town. He worked in restaurants in Europe before moving to America to attend culinary school in 2008. After graduating, he worked at Michelin-starred restaurants in New York such as Gilt and Jean-Georges. There, he became fascinated with whole-animal butchery and the high-quality, humanely raised meats that top chefs often procure through relationships with farmers. Why shouldn’t the average consumer be privy to the same stuff?

Living in Long Valley with his wife and two children (now 4 and 8), Destree eventually decided to leave restaurants, lose the long hours and long commute, and answer that question. He attended a whole-animal butchery class and, in August 2016, opened the Pastoral Pig.

“I wanted my children to have good meat,” he says. “And of course, we wanted to do it for the community, too.”

In the Pig’s refrigerated cases you’ll find ribeyes, tenderloins, and chops, as well as less familiar cuts like sirloin bavette (similar to skirt steak, great for pan searing) and terres major (beef shoulder, tender as filet mignon, but less costly). Custom cuts are available on request. Destree dry ages New York strip and rib-eye steaks for at least 30 days. They range in price from $23.99 to $32.99 a pound.

His team makes rich stock from leftover bones and turns scraps into sausages and lard. “We try to throw nothing in the garbage,” he says. Last year, Destree started preparing dishes like pork ragù, chicken curries and empanadas in the shop’s kitchen and selling them for takeout. He also stocks oils, local cheeses and fresh-baked breads.

“We’re not a supermarket,” he says. “We don’t want to be.” Instead, he offers “specials during weeks when we have extraordinary meat.”

Destree often visits his farmers and—with a chalkboard out front listing them—encourages customers to do the same. “I guarantee you’ll appreciate the food on your plate more if you do,” he says.

The shop has a website, but it doesn’t ship. He doesn’t sell to restaurants. “People say, ‘I want to know my butcher. I want him to know my kids.’”

Never does he forget what his mother used to tell him: “Befriend a cop, a mechanic and a butcher. The first two can get you out of trouble, but the butcher will give you a happy life.”